There are some questions that India poses to its travellers which will always go unanswered, such as How did that cow get there?, and Where is it going? Of course, what fun would travelling be without a bit of mystery, rhetoric and riddle.

But other questions must be answered, like why is the tomb of Humayun covered in hexagrams?

The tomb of Nasir al-Din Muhammad Humayun (1504-1556), usually referred to simply as Humayun, is generally considered to be the first great architectural epic of the Mughal empire in India and a forerunner to the Taj Mahal, built a hundred years later. The Mughals, a Muslim dynasty descendant of Tamerlane and also of Genghis Khan, ruled much of the central and northern regions of the Indian subcontinent from 1526-1857. Humayun was its second emperor.

The tomb was commissioned during the reign of Humayun’s son and successor, Jalal al-Din Akbar (known later as Akbar the Great*), six years after Humayun slipped on the staircase of his personal library and observatory—which he was ascending in order to view the rise of the planet Venus from an elevated position above the city of Delhi—and cracked his head and died.(1)

The massive mausoleum (which actually contains over one hundred graves, the most famous being Humayun’s) was constructed in sandstone and white marble between 1562-1571.  Akbar contracted the Persian architect Mirak Mirza Ghiyas to build the tomb, although Humayun’s adoring son was said to have wielded considerable influence over its design and especially its symbols. 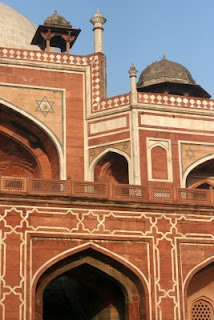 Which brings us back to one of the most intriguing aspects of Humayun’s tomb: the prevalence of the six-pointed star, or hexagram, the same which is commonly associated with Judaism today, and therefore which seems particularly striking in Indian Islamic architecture of the sixteenth century and later.

The choice of the hexagram symbol was likely Akbar’s—since there is no record of Humayun’s use of the symbol—as a kind of homage to his father’s infatuation with astrology.(2) Humayun was an avid stargazer; he organized everything from his wardrobe to his court on the basis of planetary alignment.

The hexagram was a potent symbol of astrology long before Humayun, and even long before it became one of the paramount symbols of Judaism. In astrology, the six-pointed star is the perfect alignment of heavenly bodies, rare and divine and auspicious; the symbol thus to stargazers was a connotation of perfection, auspiciousness, balance, harmony, equality.

The hexagram is believed to have been appropriated by various ancient cultures and belief systems—including Hinduism—quite independently of one another.

In ancient Hinduism the hexagram symbolized a perfect meditative state between man and God which results in moksha. It is also said to signify the union of Shiva and Shakti, or more generally of man and woman; a kind of Hindu equivalent to yin and yang.

For Akbar, calling upon ancient astrological beliefs on behalf of his father Humayun, the symmetrical six points of the star represented “the conjunction of opposing forces,” or in other words, divinely guided justice and righteousness.(3)

Furthermore, since the Muslim Mughal (Timurid) dynasty ruled over a vast Hindu-majority population in India, the cogency of the hexagram symbol among Akbar’s subjects likely would not have hurt his own popularity or legitimacy as ruler.

“Akbar’s need to associate himself with his father may have been a reflection of his belief that through Humayun he possessed a divine light that distinguished him from all of his rivals, including his brothers… In order to establish Akbar’s divine nature it was necessary to show that he was descended from a line possessing spiritual powers.”(4)

Put concisely, Akbar was keen to cement the nascent Mughal royal line, which he inherited partly through conquest of his rival kin, around the righteousness (i.e. divine predetermination or at least ordination) of his own throne. The Mughal hexagram, ostensibly homage to his father, seems to have become the enduring symbol of that self-ascribed virtue. By turning his deceased father Humayun into a kind of posthumous saint-king, Akbar made himself the heir of divinity.

But I'm still not sure how that cow got there!

[Click here for the full photo gallery of Humayun's Tomb]


* akbar ( اكبر ) is, of course, Arabic for "great" (as in allahu akbar; "God is great"). So in a wry sense Akbar the Great might be called "Great the Great" or "the Great Great" (if you were to speak to him in Arabic, though his native tongue was Persian).  However in Arabic he would not be Akbar al-Akbar but rather al-akbar al-kubara; "great" better translated as kubara ( كبرى ) in this sense of so-and-so "the Great." Akbar was allegedly named after his maternal grandfather, Shaykh Ali Akbar Jami.
Posted by The Tuque Souq at Friday, March 19, 2010

Or it could be something as simple as an Islamic ruler usurping an hindu building. Hindus have used a hexagram for a very long time. There is increasing evidence that moguls in some cases just "re-used" existing buildings.

To build this kind of mausoleum a large number of artisans and labor were used. There were many Hindu artisans or converted architect who probably wanted to pass on some message.

why did the moghuls use 12 pointed stars?

There are other instances of the six-pointed star appearing in Islamic architecture in India. In Purana Qilla in Delhi you can see it very prominently on the gate. But have you seen what happens to the negative space created by placement of several six-pointed stars side by side? It is there on Akbar's tomb in Agra's Sikandra.