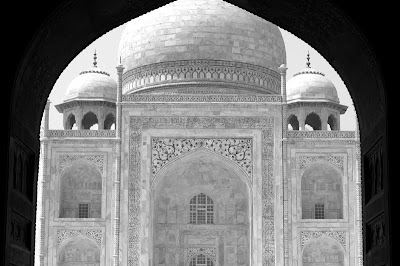 If the traveller considers himself a pilgrim in Agra then he is assured of joining one of the grandest pilgrimages he’s ever known, for no sooner does he enter the city beneath the government’s propitious welcome sign, beckoning him to the splendor within, than he is joined by a throng of thousands, maybe tens of thousands or—as they say—many lakhs of fellow pilgrims surging inward to the great monument of the world.

All that stands before the traveller is etched upon his mind and will not leave him. In lines and in shadows, in tones and in textures, in memories and in glimmering white marble, the great monument says everything the traveller must know. The monument defines itself by what it reveals to each traveller. This is the heart of its awe.