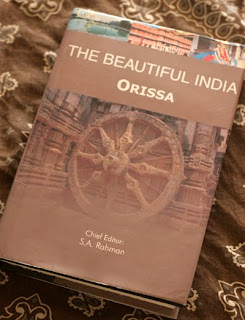 I was introduced to Oriya literature by chance and by suffering. In a Khan Market bookshop in Delhi, I decided to spend a whopping 800 rupees on the Orissa edition of The Beautiful India reference book series.

There is a different edition for each Indian state, approximately 350 pages, written in imperfect Indian English (albeit scholarly Indian English) in the style of a mid-twentieth century social science Ph.D. dissertation. In other words, it is the kind of book that would cure insomnia in a sloth; a very, very dry reading on the history, economy, language, culture, politics, demographics, industry, art and architecture of the state. But one of the few gems was the section on Oriya literature—specifically the names and themes and significance of prominent writers, novelists and poets—that set me off on the path of local literary adventure.

Within the otherwise drab pages of that textbook I discovered the name of Umesh Chandra Sarakar, whose 1888 story Padmamali is considered the first-ever novel written in Oriya. Fakir Mohan Senapti (1843-1918) is called the father of modern Oriya prose. In the late 19th century a literary movement called Satyabadi came along, known for its Oriyan nationalistic spirit. There were satirists and romantic poets and fiercely politicized short story writers. The famous brothers Mohanty, Gopinath and Kanhu Charan, wrote now-classic stories on themes of social consciousness and cultural battles with modernity during the post-partition era of early Indian nationhood.

I desperately wanted to read these works to understand the place where I’d be spending a year or more of my life.

By further chance, I stumbled upon a glorious website called Grassroots Books India, billed as the largest website of Oriya literature in translation (though it could equally call itself the only website of Oriya literature in translation). Here to my delight I found Padmamali and many of the works of Senapti and the Mohantys and other important Oriya writers, available in English translation, for download in PDF format—absolutely FREE!

Grassroots Books, a non-profit, aims to “open doors to India’s best writing — selected and translated by a distinguished group of writers and translators — by publishing and promoting these works on the web. We also serve as an advocacy organization for literature in translation, producing events that feature the work of Oriya writers and connecting these writers to the world at large.”

NB: Fellow Orissa-based VSO volunteer Sheila Ash has written a very informative introduction to and review of some Indian and Oriya lit on her blog, Ashramblings.
Posted by The Tuque Souq at Tuesday, June 22, 2010

You crazy bookworm, you will read anything.

Hi! I'm from Toronto and currently considering a VSO placement in Delhi, India for 1 year. I'm happy to have come across your blog and look forward to going through your archives.

btw love the name of your blog!

My name is Martin and I am writing to you on behalf of a website that I am currently involved in starting up. We aim to provide prospect volunteers with all the information they need in order to feel confident in their choice of organisation, position and destination, as well as inspire people to make the jump and try out volunteering.

As a part of that, I was wondering whether you might be interested in answering a few questions and perhaps sharing any advice you may have for people who are considering to volunteer.

Thanks, and keep up your amazing work!