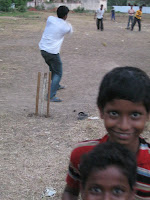 As a matter of inevitable fact, it was as certain as curry. It was as likely to happen as my stepping in cow dung while crossing the street. Sooner or later in India, it was fate that I'd become intimate with the sport of Cricket.

If only I could report that, once played, the vagaries of this insoluble game are now clear to me.

Each afternoon when the clouds and wind come by to mitigate the dreadful heat, the boys of summer--wickets and bats in hand--emerge from the innumerable nooks of the neighbourhood and descend upon the vacant field immediately next to our home.

There are about twenty-five of them, aged between nine and sixteen. Some I know by their proper names--Sunil, Puna, Gopinath, Rav--and some I know only by now-familiar faces, the ones who smile and wave and shout out "haalloo, meester reechard" every time I enter or exit our shared dirt road.

And others, I am learning, have only nicknames in the company of their mates; those few who know a bit of English dutifully translate them for me. There is Black-Boy, whose skin is darker; Fat-Boy, a rotund lad; Tooth-Boy, whose upper teeth are gapped and bend outward from his mouth; and the mysteriously nicknamed President, whose special executive authority is not yet clear to me.

Their game is sandlot cricket of no regular shape or form. I've invited myself to watch on several occasions, and been so well received as to unintentionally interrupt the game with my presence. They've practically demanded, on occasion, that I take a few practice swings, even while their game is in full flow.

But on this day, I arrive early enough to be chosen for a side; actually to play the game of cricket. 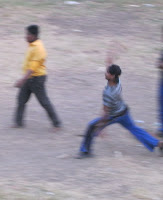 Those that know the game well please bear with me, for though I've lived a long, sporty life up to now, I've never been able to distinguish this particular sport's head from its tail. (By all means, hold me solely responsible for inaccuracies in my usage of technical terminology and my interpretations of events.)

Our sandlot cricket is, perhaps intrinsically, unorthodox. To speed up the match (so that several may be played subsequently), we are limited to ten overs and one innings per side, perhaps a variation of Twenty20 Cricket, of which there is a dizzyingly popular professional league here in India.

In plainspeak, if indeed I've understood the rudiments of the game, each of the ten-or-so players on one side has one turn at the bat, then the other side has an identical go, and whichever team has scored the most runs therein is declared the winner.

In proper sandlot form, two boys are designated captains, and they in alternation select their teams from the gathered lot until all belong to one side or the other. A flip of a bat, heads or tails, determines the picking order, and the team of the second captain receives the advantage, perhaps, of batting second.

For my inaugural game, it seems the universal logic of choosing players in an order based upon their proven ability to perform is elided; I am not chosen by so much as bestowed upon the first captain, and so advantageous--or auspicious--is my presence on the first team deemed to be that, as compensation, the second captain is allowed to pick the next two players.

Thus to me, the supposed honour of my mere presence is such that its immediate and only tangible effect is to handicap my own team by ensuring that the actual two best players are chosen for the other!

And indeed is that misbegotten honour extended when my team insists that I bat first. The game is underway when I step into the crease and stare down the bowler with my roughest-toughest, if wholly contrived, cricket face. 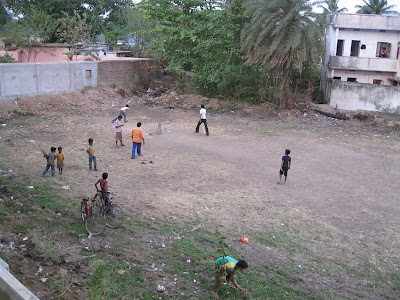 The Sandlot
(Click all photos to enlarge)
Posted by The Tuque Souq at Tuesday, May 11, 2010

Awesome post!
I will be so impressed if you understand cricket by the time you come home.

OK - not a bad first attempt rendition - mind you, I'd like to know a bit more about the quality of the pitch, the impending weather forecast, whether the other team has a good spin-bowler or not, and of course whether both teams are playing orthodox NO CHUCKING bowling or secumbing to that habit which I see lots of (apparently in deference to batting as THE main event - so that all balls are VERY fast - pitiful really).