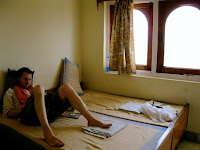 There we were, man and monkey, separated only by a few strands of DNA and a few feet--or paws--of concrete balcony.

So lazily does the town of Gopalpur confide in the traveller its few splendors--the silhouettes of the fishermen in the orange dawning sun; the casual arrival of the cool sea breeze in afternoon; the frothy gathering of merry weekenders on the beach at dusk--that he finds himself spending much of his day lying in languorous wait.

Thus were we laying in bed, at about a quarter past six, the sunrise having recently greeted our bleary eyes, barely half awake, blissfully nothing to do, except secretly wish that the invigorating sea air flowing through the open windows and balcony door of our fourth-storey hotel room did not carry the awful decibels of those sonofabitch roosters.

Then, my partner: "Ohmygodtheresamonkeyintheroom! Monkey!"

There was, in fact, a monkey in the room. A large monkey. It came in, as though by standard arrangement, through the open balcony door, and reached for Ashley's (gasp!) anti-malarial medication, which comes in a shiny-foil, glinting-brightly-off-the-morning-sunlight wrapping.

We sprang up in bed and pressed against the wall. Monkey, startled, retreated to the balcony. There was a broom. I took the broom in hand and crept toward the balcony door. Broom-first, eyes-second, I peered around the corner of the door frame.

There were two plastic chairs on the balcony. Monkey was behind the second. In the next moment, Monkey picked up the chair, threw it violently to the ground, and leapt up, screeching, into the open window frame beside the door frame beside me. (Yes, all in one moment.)

Monkey=Victor. Champion of this unlikely field of battle. (After all, we're four storeys up, on the roof, without a treetop in sight, and we have no food in the room.)

The casualties: Ashley and I, refugees in the hallway of the hotel, having fled outside our own room, in our underwear, possibly now without our shiny package of anti-malarial drugs and who knows what else Monkey is helping itself too.

But Monkey left, having burgled nothing but several weeks' worth of our heartbeats. And we were left to wonder: 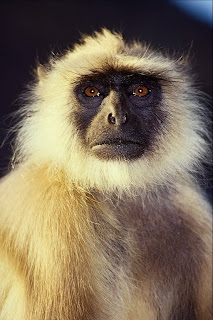 If we were naked and Monkey wore underwear, would the battle have gone the other way?
Posted by The Tuque Souq at Sunday, May 02, 2010

[the first words ever spoken by a human to the apes]
George Taylor: Take your stinking paws off me, you damned dirty ape! (Planet of the Apes, 1968)
(possible words o' wisdom in your new-found-land (-;