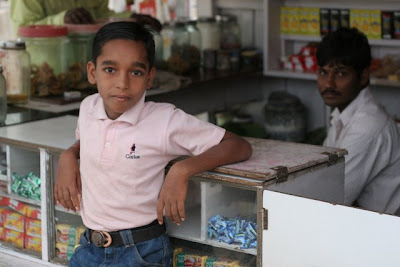 It is somewhere between startling and disconcerting. When, at the initial passing of a thought beyond your lips--as soon as your utterance becomes an utterance--your interlocutor begins to shake his head at you, smiling. You have just begun to speak, and already you feel wrong: wrong place, wrong person, wrong thought?

Maybe disorienting is the better word for it. It is probably the single most jarring accoutrement of Indian culture, coming as it does between interpersonal connection.

I'm talking about the waggle. The Indian Waggle: The ubiquitous cranial (or as much cervical) gesture of assent, comprehension (feigned or real), acquiescence, politeness, and (rarely) finality.

More commonly referred to as the Indian nod, bob, bobble, wobble, or wiggle, I nevertheless prefer the term waggle, and not just because of the generous dictionary definitions:

Where I am accustomed to a forward head-nod, a "yeah," an "uh-huh," an "mmm-hmmm," even an "okee-dokee," here in India I get the Waggle. You understand my words?; You agree with me?; You like what I'm saying?; You want me to keep talking; You think I'm the greatest thing since paneer pakora?... Then, why don't you waggle your head while I'm talking?!

How about I lose my train of thought completely as I am mesmerized by your waggle?!

All kidding aside, the Waggle is not only surprisingly endearing--insofar as it is usually accompanied by a smile--but also dynamic and (I might as well admit) infectious.

The mechanics of the Waggle may seem daunting to the first-timer. Most of the effort is in the neck, while the head is the resulting focal point of the action. Try to imagine your head bobbing smoothly from side to side, and making a three-dimensional figure-eight motion (think hard) while your shoulders remain perfectly still. Keep your eyes fixed on their subject and slowly stretch a smile across your cheeks. There, you've just lassoed the theory of the Waggle.

And though I'm far from a seasoned practitioner of the art of the Waggle, I now find its waggliness creeping into my subconscious: If I see a waggle, I waggle. Sure, it starts as a comfortable nod (as a lifetime nodder, transitioning to the waggle is a bit like trying to defeat the proverbial chewing-gum/walking routine). Then gradually it morphs--sometimes awkwardly and with a bit of strain--into the common waggle. Lately I find I can waggle without a conscious cue. I am a waggler. But don't try this at home.

--
NB: Regarding the photograph, I asked the man if I could take a snapshot of his shop. He waggled. The boy asked if he could be in the photo. I waggled.
Posted by The Tuque Souq at Thursday, June 17, 2010

i am waggling in approval of this post from toronto.

The thing I love most about waggling is when an Indian waggles back, validating your head movement
as an authentic waggle.

Thank you for this post! I ama Brazilian woman living in Bahrain, and the waggle drives me NUTS!

I want to ask it over and over again, until I get a well known yes or no, with the USUAL head movement.

I am never sure if I was understood, or if the person even cared about what I said...

So thank you. It made me feel a bit more simpathetic towards the waggle!