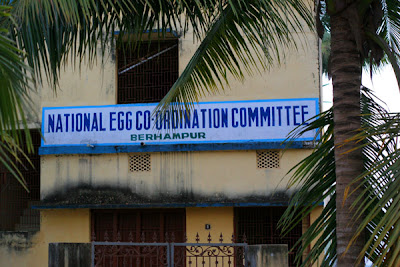 It all started about a year ago when my friend and I went up to work on his motorcycle, when I first noticed—off the side of a side road, about a half-mile from the railroad tracks in fact—a peculiar building. And this building, wouldn’t you know, had a chain across its entrance and a sign over top that read “National Egg Co-ordination Committee.”
Well I had never heard of a National Egg Co-ordination Committee before, so with a gleam in my eye, I rode off into the sunset in search of someone who could explain what it was.*
Turns out that none of my colleagues at the NGO I work with—almost all of whom pass this derelict building on the way to the office in a jungle village—knows what goes on at NECC. But they must have thought about it before, because when it piqued my interest, it was an opportunity for all of the jokes to come out of the bag.
One person said it was a government agency, set up within the bloated bureaucracy to count and tax the passage of eggs along the adjacent highway.
Another claimed it was a front for the mafia; albeit—I added—a front at which other mafia would, no doubt, derisively snicker.
Still a third person cracked wise that NECC exists to maintain the balance between omelettes and pakodas (well that's a hard-boiled egg, rolled in spicy, glowing-orange batter and deep fried), two opposing methods of egg preparation endemic to the local cuisine.
But the most resilient refrain for explicating the National Egg Co-ordination Committee is that, well, it must be an NGO—Non-Governmental Organization, that is—engaged in the work of taking grassroots egg coordination among the poor and marginalized people to the national level.
Presumably, this very minute, the coordination of eggs on a national scale is being done by a committee whose success at the village, block, district and state levels has been proved beyond question. With S.M.A.R.T. objectives, systematic Monitoring & Evaluation and a full-proof plan for Sustainability, the international donors have been boiling with optimism, scrambling to fund this innovative project; over-easy—you might say—in the yoke of their, um… souls.**
Yes, whether poached, sunny-side-up, or Benedictine, egg coordination is going national in India. Next up, the world.
Remember, one egg is, well, just an egg. But three eggs, why three eggs is an organization. And fifty eggs, can you imagine fifty eggs all getting together for change? Friends that would be a movement.
And that’s what we have here: The National Egg Co-ordination Committee anti-uncoordination movement. And after all, that’s what development is really all about.
* With all due credit to Arlo.
**The author of this blog has just been whacked by the pun mafia.
Posted by The Tuque Souq at Thursday, February 17, 2011