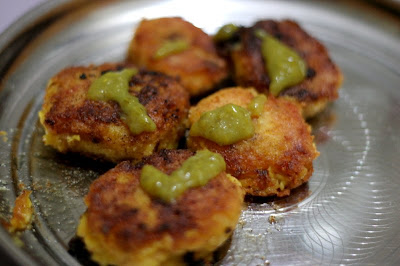 The other day my partner Ashley made a hearty, spicy dhal (split-lentil soup/sauce) for lunch. After spending the afternoon in the fridge, by suppertime the leftovers had congealed almost to the consistency of mashed potatoes or mashed garbanzos, at which point--my tummy rumbling--I concocted the following:

Spread flour on a plate. Season dhalafel balls with salt, pepper and coriander, then roll in the flour. (If using just a little oil in a wok, as I did, then flatten the balls a bit so they cook better; if deep frying, never mind.) Fry dhalafel balls in hot oil until golden and crispy on all sides (yet still deliciously mashy on the inside).

Serve on a platter, garnished with chopped coriander and green chilli sauce.

Option: make dhalafel sandwiches in roti, with fresh sliced tomato and onion, and a dash of fresh-squeezed lime juice.

Got other ideas for the mighty dhalafel, let me know.
Posted by The Tuque Souq at Wednesday, April 28, 2010

Email ThisBlogThis!Share to TwitterShare to FacebookShare to Pinterest
Labels: Indian Food, Our Kitchen

How about dhalballs in tomato sauce?